Vitamin B12 may be a small part of mankind’s overall need for nutrition, but it’s a vital one. Deficiency in this essential, water-soluble nutrient has major health implications. With an aging population, the rise of veganism, and socioeconomically imposed, unfavorable dietary habits, vitamin B12 deficiency is receiving more and more attention from scientists. But could cow’s milk and milk products such as whey become a new, more cost-efficient and highly effective way to counter B12 deficiency? 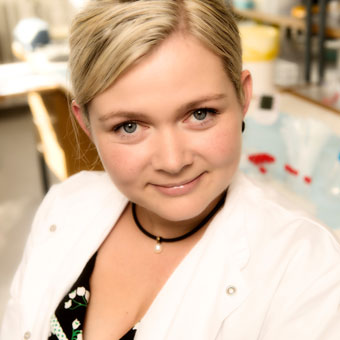 Eva is an award-winning Postdoctoral Researcher at the Department of Clinical Biochemistry, Aarhus University Hospital in Denmark. Her field of research is vitamin B12 (cobalamin) in health and disease. In 2017, she hosted the 11th International Conference on Homocysteine and One-Carbon Metabolism in Aarhus, Denmark, together with Dr. Johan Arendt. The work presented in this post is part of the TRIM (www.trim-project.dk) and IMPROVIT (www.improvit-project.com) projects financed by Innovation Fund Denmark.

For the past four years, I’ve been deeply involved in research focused on various aspects of vitamin B12 in milk and milk products. I’m particularly interested in questions such as “why does milk seem to be a better source of B12 than other food sources”, and “is it better to remedy a B12 deficiency with synthetic or natural B12?”

Let it B
Natural vitamin B12 (also known as cobalamin to reflect its mineral basis of cobalt) is found in animal-based foods such as fish, shellfish, meat, and dairy products. It has an important role to play in cell division and the formulation of red blood cells and healthy nerves.

If you’re low on vitamin B12, you’re at risk, therefore, of running into a wide range of disorders from mild paresthesias (‘pins and needles’) to anemia and cognitive decline. Luckily, many of these disorders are reversible with early diagnosis and treatment. And that’s where the search for better vitamin B12 sources comes in.

The main causes of vitamin B12 deficiency are aging, diet and medicinal side effects – affecting the ability to make the vitamin available to the body, metabolize it as intended, or to be properly distributed within the body. And, with an aging population and the rise of veganism, for example, this deficiency is receiving more and more attention from the scientific community.

While opinions are divided as to just how many people can be considered to be vitamin B12-deficient, subclinical deficiency is today considered to affect anywhere up to a quarter of the general western population. This figure is significantly higher in developing countries with little access to food sources containing vitamin B12 or whose customs restrict the consumption of these foods.

Why milk?
Numerous studies have indicated milk to be a particularly good source of vitamin B12, evidenced by the fact that, in general, people who regularly drink milk have a better vitamin B12 status than those who obtain the nutrient from other sources. But, while this phenomenon seems relatively clear, we don’t really know why milk is a better source than, for example, fish.

Recently, I’ve been involved in conducting new research to help uncover why milk is better – and to examine its effectiveness in comparison with the synthetic form of vitamin B12 found in over-the-counter vitamin supplements. Our belief was that the natural form would probably outperform the synthetic form, but we were unsure about the degree of difference or the ways in which any differences might show up.

Breakfast for four
Our rat study, which correlates with earlier findings, was based on four groups, each of which was provided with the same quantity of vitamin B12. The first group was administered a breakfast of cow’s milk. The second received a breakfast of whey (Arla Foods Ingredients’ WPC80, naturally rich in milk TC-B12). The third group dined on fish. And the fourth was given the synthetic form of B12. In all cases, the vitamin of interest had been labeled with radioactivity, enabling us to subsequently measure its comparative levels in the animals’ feces over a 24-hour period. The lower the content of vitamin B12, the more we could assume had been absorbed by the rat’s body – providing a clear indicator of what scientists call ‘bioavailability’.

An essential difference?
So which food source enabled the highest bioavailability? As expected, the milk and whey products performed well, outperforming fish as a source. And the synthetic form of the vitamin turned out to be as well-absorbed as the milk products, but with one particular difference: Follow-up dissection showed that milk products provided a higher vitamin B12 content in the liver, which is the principal site of metabolism of the vitamin. It seems then, at least from these preliminary results, that milk products can be at least as good as vitamin pills for preventing or remedying vitamin B12 deficiencies, but that the natural form of the vitamin may provide a better supply of B12 for key organs such as the liver and therefore may be a better source of the vitamin.

At this stage, we aren’t clear on the implications of this difference, and we have yet to conduct clinical trials to see whether our results are directly applicable to human populations, but the study has certainly provided a useful building block in the search for alternative sources of bioavailable, efficacious and affordable vitamin B12.